The numbers associated with American College football are staggering 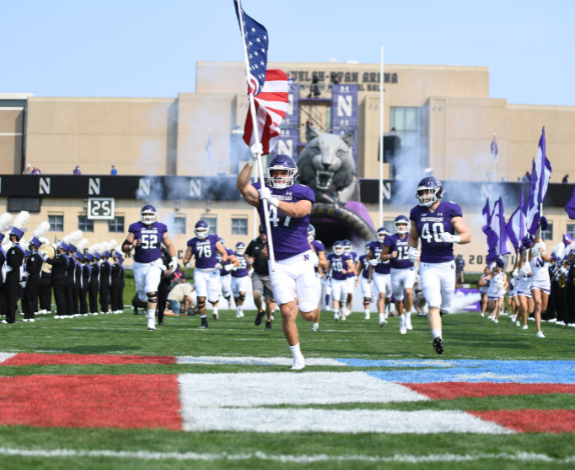 More than just a game…

Legacy’s Kevin Moore was back sharing his thoughts in yesterday’s Sunday Independent about the upcoming College Football game taking place at the Aviva Stadium on Saturday.

When it comes to the business of sport, American football, and the National Football League (NFL) in particular, is the big dog in the United States. The earning power of the players, the scale of the television and sponsorship deals and the size of the audience all combine to create the juggernaut that sits above all other sports in the US. Forbes lists the average value of NFL teams at over $3 billion each.

Sitting alongside their professional counterpart is the amateur sport of college football, itself a billion-dollar industry. It draws several comparisons to our beloved GAA — amateur players playing in front of packed stadiums full of die-hard fans and an engine behind it that generates big sponsorship revenue and television figures.

But to really appreciate the scale of college football, it is worth digging into some jaw dropping numbers. College football itself ranks as the nation’s second most popular sport when attendance and viewership are combined, larger than baseball and basketball. The National Collegiate Athletic Association (NCAA) generated record revenues of $1.16 billion for the 2021 fiscal year.

The NFL caters for the professional elite, staging 16 games on an average weekend during the season. The scale of college football is far greater with 65 games played every weekend in the top division alone. And while most NFL stadia host around 65,000 fans, college football regularly houses over 100,000 per game.

College football is widely regarded to have deeper traditions in terms of the rivalries between teams and more passionate fans due to it being more suburban than the largely city-based NFL. College football is often the only show in town. For example, Nebraska, which doesn’t have an NFL team (or any professional sports franchise), holds the record for the longest consecutive stadium sell-out in the US. For 60 years they have filled their 85,000-seater stadium, so that on game day, Memorial Stadium becomes Nebraska’s third largest city.

In recent years, London has become the home away from home for the NFL with Wembley and other stadia hosting big games, generating good attendance and interest. Similarly, Ireland has become the go-to place outside of the US for college football with several games over the past decade, none more popular than the Aviva Stadium sell-out of Navy and Notre Dame in 2012.

The Notre Dame alumni arrived in Dublin that September in unprecedented numbers, with 35,000 fans travelling across the Atlantic for the game. To put this in context, more American fans travelled to Dublin to watch Navy take on Notre Dame in the Aviva Stadium, than travelled to London a month earlier for the Olympic Games.

Economically, Ireland benefited hugely from the affluent Notre Dame travelling support. Many spent at least five days here, and they did not just confine their spending to the capital city. The wider economic benefit of the game has been calculated at well over €100m, and the event was used as a platform to launch Tourism Ireland’s ‘Gathering’ initiative, which was such a success in 2013.

As the ‘home’ team on the day, Navy were tasked with organising the event. This model changed with the creation of Ireland American Events Limited — a joint venture between Irish firm Corporate.ie and America’s Anthony Travel, which is now part of On Location Experience, one of the leading sports and entertainment companies in the US.

The new venture set about attempting to make college football an annual event in Ireland, one that would encompass a host of beneficial Ireland-American initiatives surrounding the game. The Aer Lingus College Football Series was born and attracting the prestigious Navy and Notre Dame fixture back to Ireland for next year’s instalment is a major coup for the promoters.

Despite several attempts by Covid to derail it, the series returns in earnest next Saturday at the Aviva Stadium when the Northwestern Wildcats from Chicago will host the Nebraska Cornhuskers. The high-profile Big Ten Conference fixture will open the 2022 season with the Aviva Stadium expected to host over 35,000 fans. The broadcasted game on Fox will have a live US TV audience of around 3.5 million, providing another money-can’t-buy opportunity to promote Ireland in the US.

This is the first time that either team has travelled to play in Ireland, and they are coming in force with title sponsors, Aer Lingus. On game day, 230 football players, 146 band members and 32 cheerleaders will take to the field.

The game represents the biggest inbound international event in Ireland since 2019 with 13,000 US fans and 3,000 European fans travelling for game week in Dublin. Overall, the game is worth an estimated €63m to the economy.

Home games for the college football teams are a big revenue generator so the travelling teams work with the promoter to offset some of this. But there is a bigger picture to why they come.

Game organiser on the US side, John Anthony explains, “First and foremost, the colleges see this as a big opportunity to provide a once in a lifetime experience to their students and fans. Additionally, there are unique opportunities for the universities to build international relationships across business, government, and education.”

Examples of these relationships and ancillary events will be seen throughout Dublin this week. On the business front, the prestigious Ireland–USA CEO Club Lunch, which will take place the day before the game at the Mansion House, brings together influential Irish, US and European CEOs, along with the top travelling CEOs associated with both universities.

Thousands of people are expected to attend the traditional pep rallies in Merrion Square on the eve of the game and then on match day, the unique tradition of the tailgate party will take over Temple Bar before the game.

The 5.30pm start time this year will suit the local population better than previous years, allowing for people to enjoy these events around the city before arriving at the Aviva for the main show. Tickets are still on sale via Ticketmaster so if you want to see what all the fuss is about, this is your chance.