New dawn for golf sees the establishment LIVing on the edge 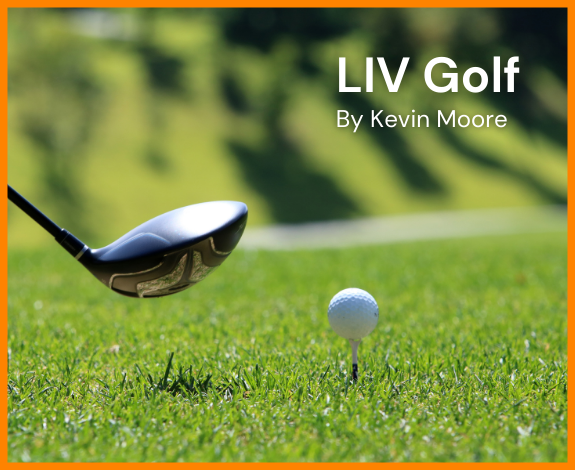 The world of golf as we know it has been turned upside down in recent months with the emergence of a new option, the Saudi-Arabian financed, LIV Golf Tour. A completely new 54-hole, shotgun start team format, that is verging towards entertainment rather than sport.

The battle between the establishment and the revolution is well and truly underway and the bottomless pit of Saudi finances looks to have the power to out muscle anything in its way. It is hard to see at this point how golf is going to be the winner. One thing for sure is that a set of already rich golfers are going to get a lot richer.

After a false start earlier in the year, LIV Golf teed off in June with its maiden event taking place in the UK. Some of the game’s biggest names on both sides of the globe were the early adopters, from America’s six-time major winner, Phil Mickelson to European Ryder Cup legends Sergio Garcia, Lee Westwood and Ian Poulter. Players at the tail end of their career, which included Northern Ireland’s Graeme McDowell, couldn’t resist the opportunity for a retirement pay-check they could only dream of.

A strong initial rebuke from the PGA & DP World Tours proceeded and players who made the move were banned from Tour events. The war had begun with the next battle playing out in the media. It was enthralling and uncomfortable viewing in equal measure. The players were challenged in press conferences on Saudi-Arabian human rights issues and sports washing claims and the rehearsed responses around growing the game fooled no one.

Rory McIlroy led the line of defence for the PGA Tour and was soon supported by elite players like John Rahm and Justin Thomas. Shane Lowry and Padraig Harrington were next, and it seemed the establishment was safe for the time being.

The next blow from LIV Golf was significant and would see the narrative shift from ageing players to current stars with the signing of fan favourite Bryson DeChambeau. The 28-year-old former US Open Champion, who was responsible for bring a new set of fans into the game through his big-hitting, was a major coup. Alongside compatriots Dustin Johnson, Brooks Keopka and Patrick Reed, LIV Golf had now snatched over a third of the 2021 US Ryder Cup winning team.

With its back up against the wall, in marched The Open. The biggest tournament in world golf staged in the home of golf at St. Andrews, welcoming back Tiger Woods was just the defence the establishment needed to restore order. The tradition, the history, the crowds, the test of golf, the purity. The pendulum seemed to swing back.

Then Cameron Smith, the new Open champion refused to rule out a move over to the LIV, spearheaded by his fellow Australian, Greg Norman, and the circus continued. Just days later, LIV had taken a major scalp, a captain. The announcement that European Ryder Cup Captain Henrik Stenson had defected saw him immediately removed from his station and the war raged on.

But to what end? Amongst all the chaos, the battle plan and ultimate vision of LIV Golf remained unclear. With billions of dollars being thrown at the players, is it realistic to think they could turn a profit, and would they bother going after a sponsorship revenue stream?

Last weeks announced went some way to answer these questions, providing much more of an insight into their plans. LIV Golf tweeted, ‘LIV Golf is giving the principal players on each team 25% ownership in the team and providing full support to acquire sponsorships and build the team into the equivalent of a major sports franchise.’

This revelation will have shaken the establishment to the core. Like it or not, making every team a franchise and making every star player an owner is a smart play. If they succeed, there will be profitability in the league itself along with a value against each of the four-person teams.

No wonder the American heroes like DeChambeau, Johnson and Keopka opted in. American Franchise sport is all they know. Tradition is nice but a bucket load of cash and part-ownership of a franchise is a different ball game.

While the player war will rage on, and interesting battle will now commence around sponsors, one that could really damage the PGA and DP World Tours.

With over 50 official partners listed on the PGA Tour website, sponsorship is a key revenue driver for the Tour, contributing significantly to their reported $1.5 billion revenue. This income is crucial in enabling the Tour to increase prize funds, something that is now more important than ever in the fight to keep their players.

The PGA Tour sponsors are made up of an array of heavyweight global companies that feel aligned to the current game and PGA Tour brand. Rolex for example is unlikely to switch to LIV Golf but plenty of brands will be lured into the new-look approach that LIV has taken.

The likelihood is that the naming rights will become available for the teams themselves. The high cost would be an easy sell for a company looking to break a new market and gain traction globally.

This week LIV Golf announced a major expansion plan for 2023 with the twelve teams taking part in a fourteen-tournament schedule across North and Latin Americas, Asia, Australia, the Middle East, and Europe.

LIV Golf have stated that ‘The 2023 league schedule will not compete with the Majors, international team events or heritage events so the best players in the game will always be able to make their own choices about where to play.’

The four golf Majors operate outside the Tours as standalone organisations and to date they are keeping their cards close to their chest, allowing all qualified players to play. In some ways they hold the key to the future success or failure of the rival Tour.

One of the last weapons in the fight against LIV Golf is world ranking points. As it stands LIV Golf events will not have world ranking points attached to them so the Liv players will start to plummet down the rankings and only those with major winner exemptions will be able to compete in the flagship events. This looks like the PGA Tours last line of defence.

Momentum is a hard force to stop and with the team franchise plans revealed, sponsor and increased broadcast money will follow. As the weeks and months go by, the wounded PGA Tour is in danger of loosening its firm grip on golf. Finding a way to co-exist might be their only option.